Keep up to date with

Our  new mobile phone detection warning system has been launched . Launched at last week’s TISPOL Conference  www.tispol.org in Manchester, the system has been designed and developed with the assistance of Dr Helen Wells www.twitter.com/roadspolicing , a criminologist  with a specific interest in road traffic offences,driver behaviour and roads policing who is based at Keele University.

Early interest in the system has been considerable. The first is due later this month in Norfolk, with several other UK police forces expressing an interest or requesting a demonstration. Enquiries have been received from Belgium, Finland, Lithuania, New Zealand and the United States.

The system comprises a sensor capable of detecting vehicles where there are active 2G, 3G and 4G phone signals, and an LED warning sign located a short distance along the road. As long as the activation meets certain pre-determined parameters, the sensor will pick up that a driver is using a phone for calling, text or data purposes and will activate the warning sign. This shows an illuminated mobile phone icon within a bright red circle and diagonal red line.

This device is purely about education, warning drivers and being able to identify when the driver was on the phone. It is the first such system to have a direct interaction with a mobile phone offender.

We are not currently connecting the system with enforcement, but we plan to work towards that.

This system is without doubt ahead of the game. The strength of vehicle-activated LED signs is that they identify the offender and only trigger when they’re necessary.  The warning will be obvious and will stand out.

The technology can detect if a driver is using Bluetooth, and will therefore not trigger the warning sign. However, any system finds it hard to differentiate between users in the car, we accept that some activations might be triggered by non-driving occupants. The vast majority of activations will relate to drivers, and we don’t see a problem when passengers activate the sign. In fact, it’s all part of the education message that using a phone when driving is not only illegal but very dangerous.

Our advice, along with all road safety organisations, is to do nothing other than drive when at the wheel. Minimise distractions and build in breaks to check voicemail, texts and emails.

If you require any further information please get in touch with our Sales Team sales@www.westcotec.co.uk 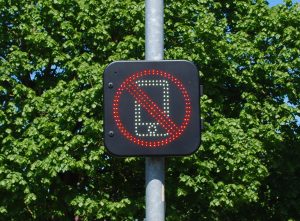